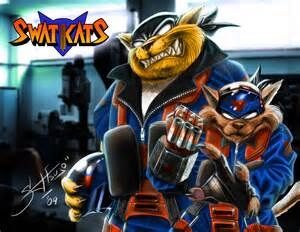 The SWAT Kats are a ragtag duo of vigilante heros that protect Megakat City.

Two Enforcer Pilots, Jake Clawson and Chance Furlong were trying to stop the villain Dark Kat from blowing up the new Enforcer HQ, their Superior Ulysses Feral ordered them to let him handle it. Unfortunately their missiles were already locked onto their target, that's when Feral clipped their wing causing them to spiral into the new building thus blowing it up. Jake and Chance were unharmed, however Feral fires them and forces them to work at a salvage yard until their debt to repair the building is paid off. At first they are angered, then Jake suggests they build their own jet to get back at Dark Kat and any other criminal that tries to attack their city. And thus, the SWAT Kats T-Bone and Razor were born.

Chance Furlong is T-Bone, the muscle and brawn that makes up the Swat Kats. He is also one of the best pilots and the most daring of the duo, he loves flying the Turbokat and never ejects knowing that it always comes through for him. He's a kind and fun loving kat, he's always seen watching his favorite TV show Scaredy Kat, much to Jake's annoyance.

Jake Clawson is Razor, the brains and tech expert of the SWAT Kats. Jake is the one who built the Turbokat from spare parts found in the salvage yard, he also built all their weapons and the intense firepower the Turbokat posesses. Jake loves watching horror movies, as shown in the episode "The Ci-kat-a". Like Chance, he is kind and friendly. He's also a martial artist, his favorite late night TV show is David Litterbin (an obvious pun on David Letterman).

Deputy Mayor Calico "Callie" Briggs is the SWAT Kats' biggest supporter. She's the one that is really running the city whereas she writes all of the Mayor's speeches and does all his paperwork while he goofs off and plays golf. Whenever there's trouble in Megakat City, she contacts the SWAT Kats using a mini communicator they gave her.

For example, in the episode "Night of the Dark Kat" Hard Drive took over the Turbokat and tried to turn the city against them, Callie told the SWAT Kats to take her hostage. With her help, they were able to recover money stolen by Hard Drive and clear their name. Chance/T-Bone has a huge crush on her, but it's shown she likes Jake/Razor much to his dismay.

Niece of Commander Ulysses Feral, Felina is a lieutenant in the Enforcers. Unlike her uncle and comrades, however, Felina sees the SWAT Kats as allies rather than nuisances.