Personality-wise, Jake is like Chance, he's carefree, courageous, loyal, confident, generous, and friendly. He is also the smarter and more athletic of the two, using his genius intellect to create all the weapons the SWAT Kats use during their heroic exploits and martial arts skills to use them. He keeps this up even when under the guise of "Razor". However, unlike Chance he is far more cautious and not much of a risk taker, something Chance likes to push him to do.

Though, as the gunner, Jake does hold a lot of weight on his shoulders as every shot he takes he could accidentally hurt an innocent bystander. In "Razor's Edge" Dark Kat exploits that and causes him to lose his confidence and puts them in jeopardy when they take to the skies once again. 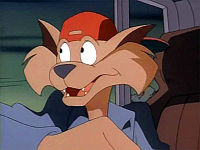 Retrieved from "https://swatkats.fandom.com/wiki/Jake_Clawson?oldid=5655"
Community content is available under CC-BY-SA unless otherwise noted.