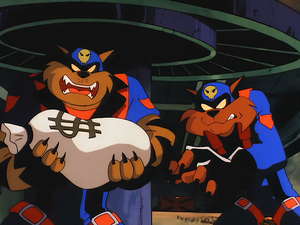 The Dark SWAT Kats were malevolent dopplegangers of the SWAT Kats featured in the episode, The Dark Side of the Swat Kats. They hailed from an alternate reality where many individuals held opposite personalities or personal histories from their 'prime' universe counterparts.

The Dark SWAT Kats were encountered when the 'prime universe' SWAT Kats were accidentally transported across the dimensional axis after the Turbokat was hit by lightning while testing Razor's new Dimensional Radar. They quickly discovered, through mistaken identity, that the SWAT Kats of that world were enemies of Megakat City, and allies of Dark Kat. The 'prime' SWAT Kats resolve to prevent their evil counterparts from setting off a bomb created by Dark Kat that was designed to destroy Enforcer Headquarters.

The SWAT Kats and the Dark SWAT Kats encounter each other while trying to steal a Mega Detonator from Pumadyne and get into a lengthy fight. The Dark SWAT Kats, utilising much more brutal technology, manage to subdue their 'prime' counterparts and set them up for arrest by the Enforcers. The 'prime' SWAT Kats are mistakenly released from prison by an evil Callie, and go on to engage their evil selves in a dogfight (or, more correctly, cat-fight) to prevent them from using Dark Cat's bomb, and are seemingly defeated, but make a dramatic reentrance and jam the bomb bay door of the Dark SWAT Kats' jet, causing the bomb to detonate inside and mysteriously erase them from existence.

Differences from the good SWAT Kats

What they have in common with the good SWAT Kats