Chance Furlong is one of the two main protagonists of SWAT Kats: The Radical Squadron. Once a member of the Enforcers, he is now part of a duo of crime fighting vigilantes known as the SWAT Kats, consisting of himself and his partner Jake Clawson. Taking on the alias "T-Bone", Chance serves as the duo's pilot.

Unlike Jake, Chance is more muscular and heavy. His fur is yellowish tan with rusty red stripes on his arms.

Personality-wise, Chance is like Jake, he's fun loving, wild, honest, sincere, and friendly. He keeps this up even when under the guise of "T-Bone". However, unlike Jake he's is far more "reckless" and a risk taker pushing the Turbokat to the limit, something Jake doesn't take so loyalty to, He likes to be a funny guy. 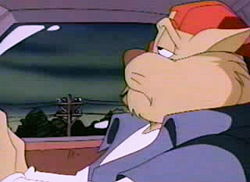 When Chance was a kitten, he would always read comic books and want to be a good guy. Thus making him decide to enroll into the Enforcers.

One day, Jake and Chance were chasing after Dark Kat as Enforcers and thanks to Chance's superior piloting, Jake was able to lock a target on Dark Kat's ship. Both were ready to shoot down the evil villain but their superior, Enforcers commander Ulysses Feral, told the two to stand down and allow him to take Dark Kat alone. Seeing the stupidity of Feral's plan, Jake and Chance decided to rebel against orders and take the shot. However, Feral used his wing to tip their's, causing Jake to miss Dark Kat and Chance to spiral out of control and crash right into the Enforcer's HQ. Needless to say, Dark Kat escape thanks to Feral's interference.

While he was okay, Feral took his anger out on Jake and Chance and dismissed them as Enforcers. He then sent them to work at the local salvage garage to pay off the damages Feral caused. Still, Jake and Chance wouldn't have it, using the parts far the salvage yard, they created the powerful Turbokat jet and many more vehicles.

Retrieved from "https://swatkats.fandom.com/wiki/Chance_Furlong?oldid=5653"
Community content is available under CC-BY-SA unless otherwise noted.