Thanks again! I'll make sure this doesn't happen again and the wiki keeps clean :3

Sannse, is there a way to permanently ban that guy's access to this wiki? It's getting a bit annoying having them return over and over with more accounts just to say the same... 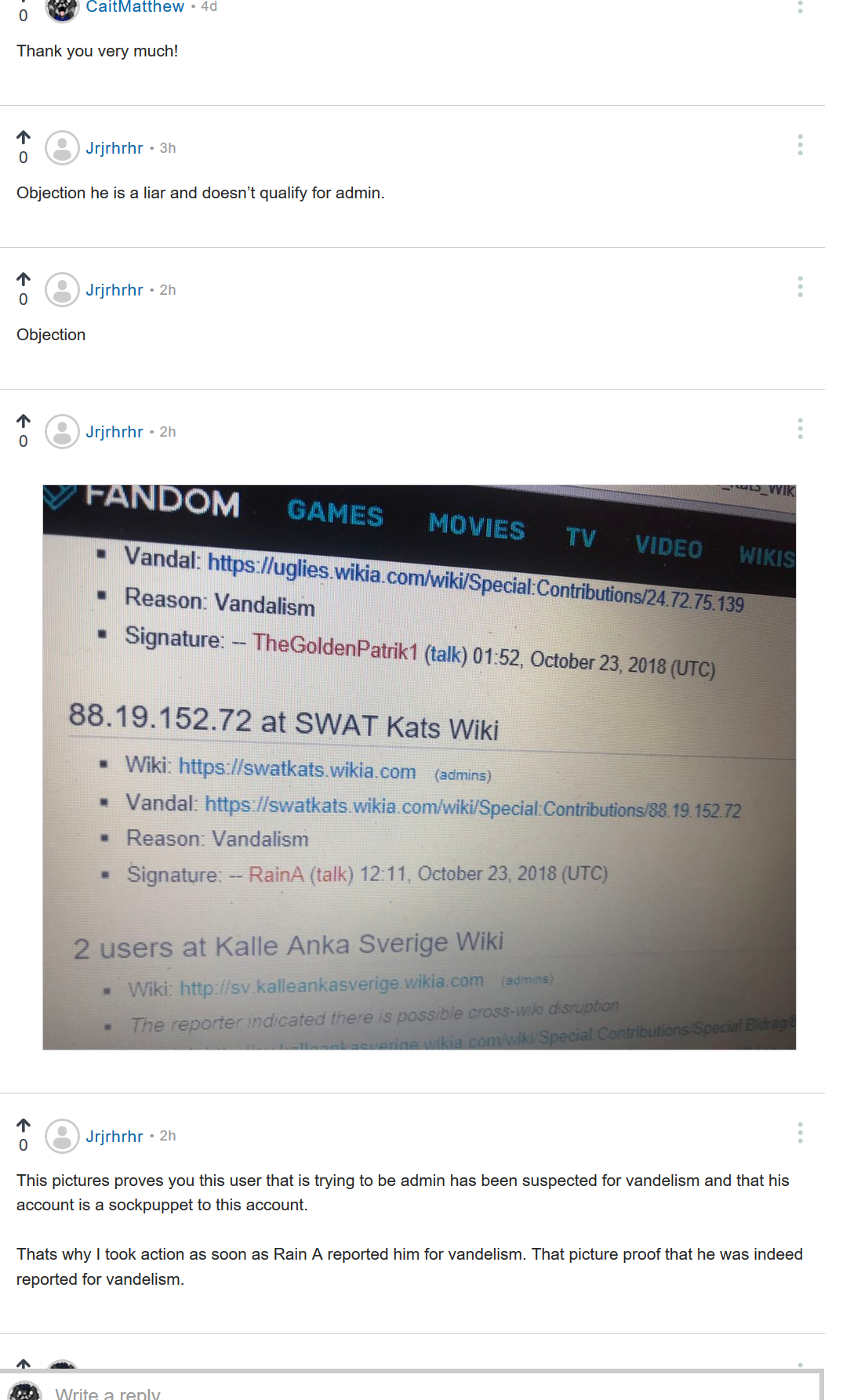 I'll gladly apply for it. I may not have any experience about how the web works, but I did worked as mod/admin previously in different forums. Also, I know about this show very well and have access to almost all the material and info of it, so it will be easy for me to keep this wiki clean and true. 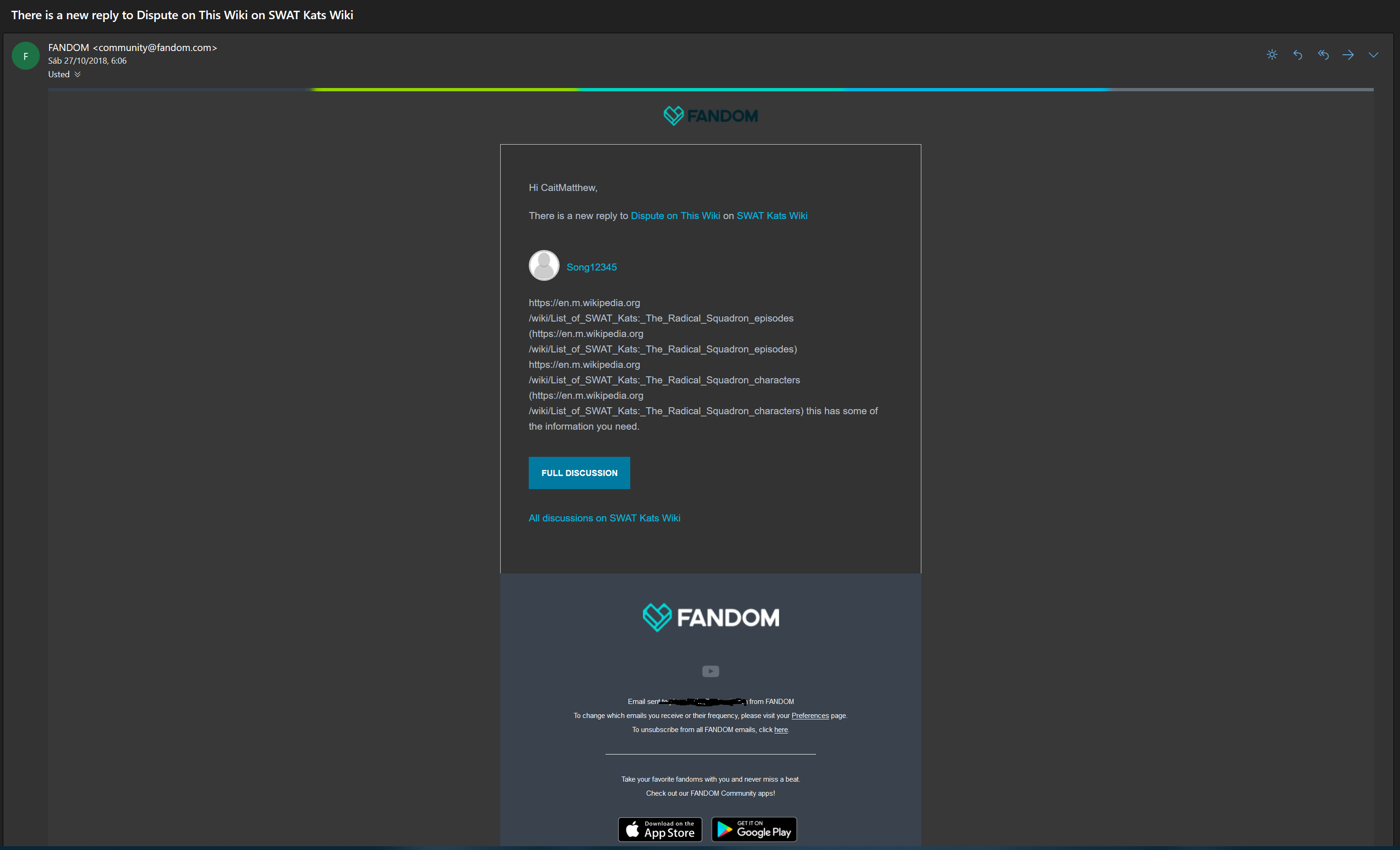 Well, if you read that information you linked and compare it with the entries you are restoring, you will see none of them exist, meaning my actions were right and yours were not. I hope you understand that what you were doing was not fighting the vandalism, but doing it yourself. You can't give any more information because it doesn't exist. We at swatkats.info are in touch with the show creators and they never showed material about this. Even more, the show was cancelled and never got a 3rd season and the creators were kind enough to give us all the production material for all the unfinished episodes, that you can find here: swatkats.info/swat-kats-episodes/unproduced

As you can see, none of them have anything to do with those entries.

I hope this clears everything.

^Thank you! You just proved I'm right. Not a single entry you are restoring is mentioned on those links. :3

That contributor has invented everything. Again I ask you: do you have anything that proofs this information is OFFICIAL from the show? If so, show.

Song12345, do you ever know about the show? Do you have any proof that verifies all the content you are "restoring". If you have any official source for all this, all the SWAT Kats community at swatkats.info would appreciate it a lot. If not, you are the vandal here.

As I am writing this, the guy returned and is again undoing all the cleaning done. I won't touch anything, so you Sannse can see it all by yourself.

First of all, thanks to give us your time.

This is much easier to explain that is seems. There is a user in this wiki writing fake entries related to a fanfic, a story created by the user in its enterity. The fanfic/fake entries/information can be clearly seen by their odd/bad english writing and because it has "Madkat's and the SWAT Kats" written everywhere (that is the name of the fanfic). The user claims that this fanfic is the season 3 to 4 in the show, when the show only has 2 seasons and got cancelled afterwards (there is a movement of the creators right now trying to bring the show back, but they are keeping all the information in secret while they find an investor).

All this information can be found here: en.wikipedia.org/wiki/SWAT_Kats:_The_Radical_Squadron

To provide more information about how to find what is fake content and what not, you can just read the entries and you will see certain similarity in all of them:

For example, all male entries have the same almost copy-pasted information:

He is Very Muscular and his chin look alike Commander Feral's types.

He has Sir Ector's Mustache from Sword in the Stone.

He is color fur lookalike Snooper from Snooper and Bladder.

The muscular thing appears in ALL the fake male entries, and the rest, as you can see need a reference of a existing thing to describe the character, since there is no screenshot they can provide.

Another example is the 3 fake vehicle entries that have bad drawings as a way to show how they look, again because there is no possible screenshot for them. Also, you can notice the bad english.

Finaly, this is the complete list of the fake entries, ABC ordered:

Burt Reynolds ("voice actor" of one of the fake characters)

Dom Deluise ("voice actor" of one of the fake characters)

Fake entries pool (I created this to link all these fake entries into one, some probably got deleted after the VSTF acted)

Madkats and the SWAT Kats

Turbomanta (one of the entries with a drawing)

Ultra Panther Chopper (one of the entries with a drawing)

Ulysses Feral's Trouble and Punishment in Spin Off Squeals

If any more information is needed, i can provide it.